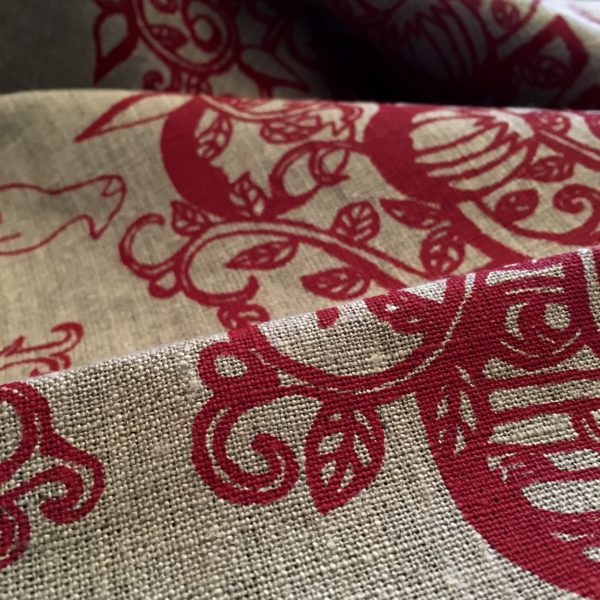 Western Europe didn’t get a look in on screen printing for almost 500 years after its initial development. It was first recorded as a recognisable form in China during the Song Dynasty (960-1279 AD). In the 1960s it really took off as an art form in the West, its popularisation accredited to Andy Warhol with his Marilyn Monroe screen-print the Marilyn Diptych.

Accessibility to all, has given rise to a variety of styles and techniques. With sustainable resources becoming a prominent discussion, independent artists like Helen Round and Kate Westcott have tapped into a market that craves the simplistic, the stylistic, and the ethical.

A major influence in many print patterns commonly considered as English was, India. Indian designs were hugely seductive to European tastes throughout the 17th Century. Chintz grew more fashionable due to its affordability and availability. Orders were sent to India for new patterns of heraldic symbology–English flowers and birds, often on a pale background. The end result: a hybrid, avant-garde style now considered a ‘classically English’ look.

You can see the influence that Indian patterns still have on modern artisans. Ursula Hunter is a great example. Her main artistic message is concerned with “the relationships between rare species of British animals and plants” (Period Living, issue 317, 2016). Ursula’s bold and floral designs remains reminiscent of Indian block-printed art.

Handmade screen prints are no longer as common; they take a lot of time, effort and money to produce. Larger-scale designers like Vanessa Arbuthnott however, crave the more rustic, handcrafted feel and to that end, many of her designs are block-printed in India to capture that unique human touch.

Another example is Sam Pickard. Her inspiration comes from daily walking in the North Devon countryside and we can see beautiful floral designs on pale backgrounds. Sam’s work does have a modern feel with many of her products not featuring repeated patterns, yet even her work has an essence of Indian sway. India’s influence is deeply entrenched in English screen-printing and embroidery; a glimpse at how much of our culture owes credit to ingenuity from beyond our immediate borders.

This site uses Akismet to reduce spam. Learn how your comment data is processed.