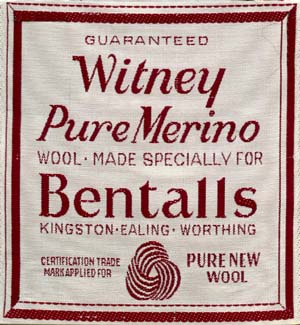 From the early 16th century, the Oxfordshire town of Witney became dominated by the business of cloth and blanket making. For four hundred years until 2002, many types of blankets were made in a wide variety of sizes, weights, qualities, colours and patterns.

Hotels, department stores and retailers placed custom orders. Business expanded to meet demand and  eventually there were five blanket factories in the town until the closure of the largest blanket maker, Early’s. This resulted in the complete liquidation of the town’s blanket industry.

Plain weave blankets would have been originally made on hand looms, until the invention of the power loom. These were the mainstay of all the Witney companies until the 1960s. Depending on bleaching, the majority of these blankets were in cream or off-white. By the 20th century it was common to dye these blankets one bright colour. The edges were sometimes bound with satin material instead of traditional whipping. This softer edge added a touch of luxury.

One of the best known Witney products was the point blanket. Each was made from wool and decorated with one or more stripes of colour at either end. Most notably, they had several short lines known as ‘points’ sewn or woven into one corner. The number of points on a blanket indicated its size and therefore its value.

With a lifetime of four hundred years, Early’s of Witney produced a wide and igneous variety of blankets. For a more comprehensive look at the differing types and how they changed over the centuries, you should definitely read The Witney Blanket Story.

Why Did the Blanket Factories Sink?

Witney blankets were sought after and so popular they were sold and distributed globally. So what put them out of business?

My husband and I moved to Witney in the nineties. During the years we lived in the then, relatively small market town, Early’s Blanket Factory was still operating. I used to frequent their small factory outlet to buy offcuts/rejected pieces of their blankets for my two large dogs and therefore, would treat them to a little bit of British manufacturing history! How lucky were they?

Five years ago, whilst rummaging through a bric a brac store in Wiltshire, I found two feather eiderdowns in a rather unfashionable peach colour. This quickly paled into insignificance when I spotted the, Early’s of Witney labels and I bought the pair.

Originally, an eiderdown would have been laid over blankets for extra warmth or to top/dress the bedding. Did the designers realise then, the successor of the same would cause the  demise of their mainstream business?

This site uses Akismet to reduce spam. Learn how your comment data is processed.